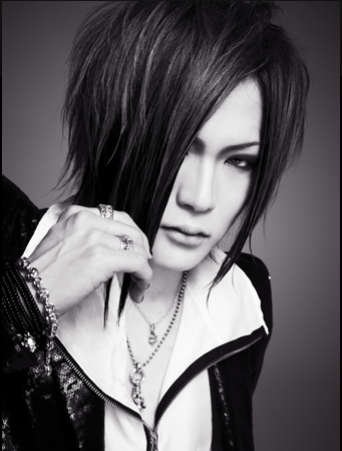 the most frightening experinece of Uruha’s life was when he was being chased by the Yakuza
His favourite animals are domestic ducks, penguins, dogs and white bears (I think that’s a polar bear)
He loves to challenge people on his gameboy advanced
He hates eating olives
Uruha has a total of nine piercing, five on his left ear and four on his right ear
He used to work at a vegetable shop
His favourite colours are grey and purple
He also likes to go bowling
Uruha sleeps until someone wakes him up (but he hates being woken up). But if no one does, he won’t get up. He’s glued to his bed.
Occassions: If it’s a tour, Kai will wake him up because he’s the only one awake.
If it’s normal day, Reita calls him.
He drinks soymilk. I don’t know, he just drinks it every morning. And Reita gets irritated because he thinks Uruha is showing off when he does that.
Day commences
Depends on what they’re doing, but Uruha tends to sometimes sleep during the day when he’s not doing anything. Like in studio or something. And if he’s not sleepy, he’ll:
Bring in games to play or play with others
Bring in dvds to watch
After a good days work, he goes to a family restaurant to eat (this is new, cause, well, the post he made)
he admits this is bad, but if he can’t get to sleep, he’ll drink a bit and then he can go to sleep
he hates it when people ignore him on purpose
he actually doesn’t really like it when he has to show his thighs
is a proud uncle
thinks he looks smart in glasses
hates being ignored when he is talking
doesnt find naked women erotic
looks at the person on the inside before he judges on them
he was made fun of in school because of his lips
used to work in a grocery store
met reita through soccer club/team at school
fights with reita over food
when sleeping over at the others places, he usually steals thier beds, making them sleep on the floor or couch.