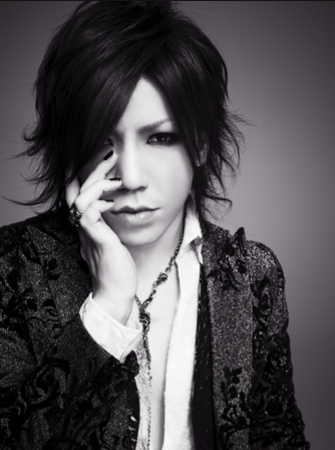 Aoi admits he has a habit of playing with his sideburns.
He loves to eat things made with love
He used to want to be a bike racer
He collects sunglasses, perfume, accessories and clothes
He used to work in a wedding hall and at a convenience store
His favourite season is winter
Aoi has two lip piercings (although he normally only wears on lip ring), one piercing on his right ear and two on his left ear
has a belly button ring
the oldest member in gazette
likes Vivenne Westwood
born in mie prefecture
has to sleep on the guest bed when he goes home to visit his parents
worst point is his temper
wears the clothes that fans send him
wanted to be a pro motorcycle driver when he was younger.
loves Metallica
does kendo.
likes to play video games
started playing the guitar because of his brother
real name is Shiroyama Yuu
likes surfing
loves strawberries
is very courteous to anyone who visits his house (ie. offers drinks, food, etc)
strongest subject in school was Home Economics.
his favorite colors are black and white
uses mouthwash after lives.
stopped dying his hair after being in gazette for a while
often smokes
likes to drink coffee
is 171 cm tall and his blood type is A
have 3 ear holes on his left ear, but he rarely shows it in photos
speaks Kansai-ben
enjoys wearing sunglasses
was in a baseball club at school
compares himself with a fox.
rival is his father
favorite phrase; ” No. ”
wears Bvlgari cologne
likes to wear dangly stuff during lives because it gives him more energy
says a lot of ‘mmmm…’ and ‘nn…’s when he speaks.
is a meticulous planner, scheduler and likes to adhere strictly to his daily schedule
collects sunglasses, perfume, accessories, and shirts
his ESP guitar is buyable!
his lip piercing resembles the one Miyavi has
Aoi loves Mika Nakashima. He listens to her songs whenever he feels sad.
used to work in a convenience store
He has recently gotten a nose ring
Recently took out his lip-ring, but may put it back in